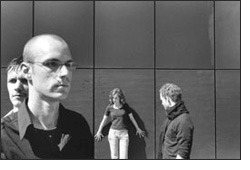 Born in 1977, Mik Keusen began his classical piano studies at the age of 8.

As a teenager, he discovered the world of jazz music and was fascinated by the art of improvisation and by interplay with other musicians. Concerts in his youth inspired him to follow the path of a professional musician and begin his third-level studies in music.

After graduating, he continued his piano and pedagogical studies  at the Musikhochschule of Lucerne, with, amongst others, Hans Feigenwinter, Chris Wiesendanger, Christoph Baumann and Elena Szirmai.

In 2000, Mik Keusen first discovered Don Li’s long-established Tonus-Music. Fascinated by the concept of Don Li’s music, he played as part of Zimoun Momental and Zimoun Na and thereby deepened his perception and feeling of form, repetition and reduction.

These experiences  resulted in the CD productions “Zimoun Momental“ and “Zimoun Na“, featuring the musicians Don Li and Philipp Schaufelberger.

In 2003 Mik Keusen founded his own quartet, named BLAU, with whom he ceaselessly composes new music with. After just one year, he received the Diploma Acknowledgement Prize from the Axell and Max Koch Foundation Lucerne for his work with BLAU.

In spring of 2005 he was commissioned by the Paul Klee Center to write a composition, which can be heard as part of its current exhibition.