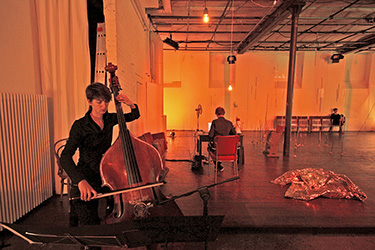 
Abstract acoustical landscape for a quintet and electronics

In 2012 Anna Schölß, Nela Adam and Marcel Zaes initiated the eight-part work WÜSTEN I-VIII including music, dance and visual arts. The three artists relocated their workplace to the Egyptian Sahara in order to develop the piece there. Accordingly, the first two elements were first performed in public in Egypt, those that followed in various concert, theatre and art spaces in Europe: These places were the Schwere Reiter Munich, the Kunstarkaden Munich, the Schwankhalle Bremen, Hochstätt as well as the Tojo Theater Bern. On the way to the last element WÜSTEN VIII, which was performed in the Tojo Theater Bern, the music ensemble continuously grew. Marcel Zaes wrote the three and a half hour composition of the same name, WÜSTEN, for a quintet. The released CD contains a one hour long version of the “WÜSTEN” music, performed by the project ensemble, which was made up of high-calibre artists. The basis of the composition is formed by rigid pulses, shifting relative to one another and thus generating an acoustical flicker, which might evoke memories of the hot air flickering in the Egyptian Sahara. Time and again, the slow, viscous sounds emit fine rhythms as well as short sub-bass beats which rather suggest the possibility of a form than create one.